A production Coveo organization powers your Coveo search page and/or components. Changes made in this organization affect the content your end users find in their search results, often in real time.

It’s strongly advised against going live with a non-production organization due to its limitations.

Definitions and Use Cases

A trial organization lets you experiment with Coveo for 14 days before committing to a full license. It provides a dashboard to guide you through the essential features you should test during your trial.

You can register for a free trial on the Coveo website.

You can also create a trial organization when installing Coveo for Salesforce, Coveo for Sitecore, or Coveo for ServiceNow. 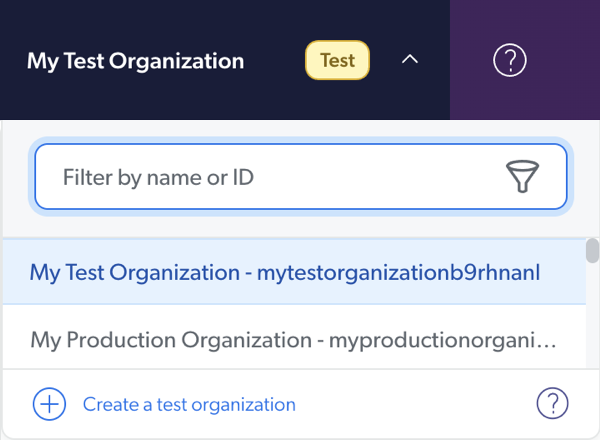 It allows its creator to make quick, small-scale tests or to explore features in their own environment, without disrupting the work of other Administration Console users. For example, one could create a test organization to try a feature as they follow a Coveo training. When the creator is done with their test, they can either delete the test organization or keep it for future use.

However, test organizations offer limited performances and can’t be upgraded to another tier of organization (e.g., sandbox organization). You should consider creating a trial organization if you expect to need a license upgrade to conduct your tests properly.

A test organization quickly becomes inactive when it doesn’t receive any queries. It’s automatically deleted 3 months after its creation.

To conduct your tests, you should have your non-production organization index sandbox instances containing demo or test data. This practice prevents an unnecessary load on your production servers and unauthorized access to your production data by developers or Coveo Administration Console users.

1: The number of indexes for each organization is optimized for performance and redundancy.

2: Alert escalation for incidents are delayed.

4: You can review the product type in your license details.