The Coveo indexing pipeline is the process through which all content retrieved by a source goes before being indexed. The items get into the indexing pipeline either from Coveo source crawlers while the source is indexed (see Rebuild, Rescan, or Refresh operations), or when pushed by a custom process taking advantage of the Push API.

For an administrator, a content manager, or a developer, knowing what the indexing pipeline does is useful in cases such as:

See also About the Indexing Process.

The indexing pipeline consists of a series of sequential stages illustrated in the following diagram. As an administrator or developer, you can control the behavior of stages shown with a bright orange background, but can’t for the other stages. 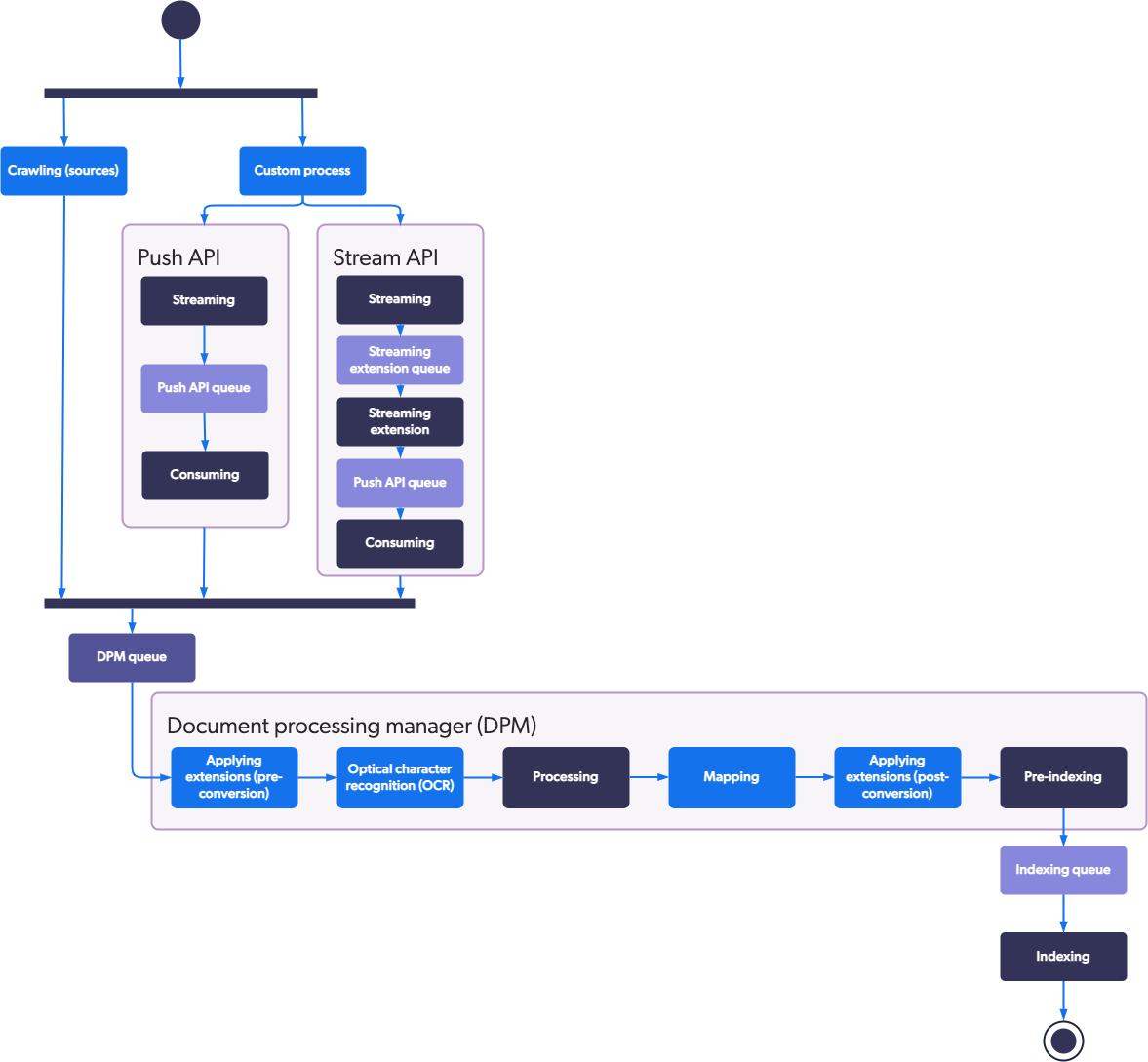 Each indexing pipeline stage is described in the rest of the article.

A source crawls its target repository to fetch and push the content and properties of each repository item (see Add or Edit a Source).

As a member of the Administrators or Content Managers built-in groups, you can add sources from the Coveo Administration Console. Some item metadata is already made available by the connector, including the URI, modification date, and more depending on the source.

The first Push API stage; reception of items to index from an external custom process.

As a developer, you fully control when and what items you send to the Push API, one by one or in batch (see Push API Usage Overview).

The Push API queue holds items ready to be processed by the Consuming stage.

The last Push API stage transfers items to be processed from the Push API Push API Queue to the item processing manager DPM Queue one by one, or in batch, depending how they where pushed to the Streaming stage.

The DPM queue holds the items ready to be processed by the item processing manager (DPM) set of stages.

Most indexing pipeline extensions are added in the post-conversion stage (see Pre-Conversion Versus Post-Conversion).

This stage essentially converts the content and properties of each item from its native format into a common format suitable for the Indexing stage using the appropriate Coveo converter for the supported file formats.

By default, there are no post-conversion extensions.

As an administrator, maybe with the help of a developer, you can:

When assigned to a source, the script of an extension is executed for each source item.

When more than one pre-conversion extension is assigned to a source, they’re executed sequentially in the order in which they’re added to the source configuration.

When an extension script throws an error, the item keeps going through the next indexing pipeline stage.