This page summarizes the new feature and bug fix introduced throughout 2019.

The latest changes are available in Interface Editor Release Notes.

This release re-introduces UI View support for some of the advanced settings that were only configurable through Code View since the June 2019 Release.

Partial UI View support has also been re-introduced for the Folding component. While you must still add the component through Code View, you can thereafter edit it from the UI Settings menu. The FoldingForThread component is still not supported in UI View.

You can now toggle between light and dark mode in Code View.

The Category Facet, Timespan Facet, and Simple Filter components are now available as drag and drop components in the Interface Editor. 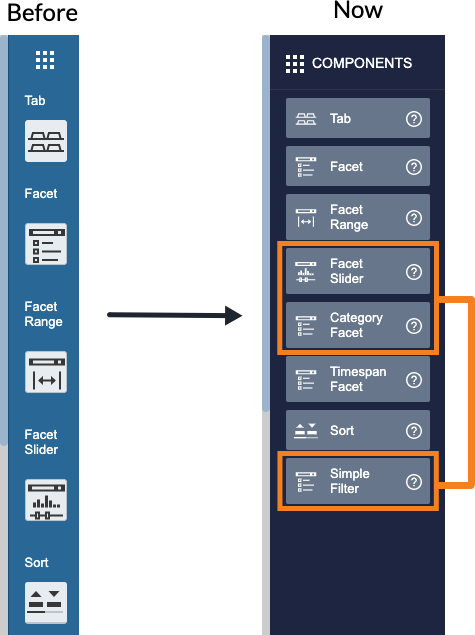 The Add a New Tab button has been removed. Pre-configured tabs can now be created more naturally by drag and dropping a Tab component in the page.

Several advanced components and options have been removed from the Interface Editor in an effort to make it easier to use.

You can still leverage advanced components and options in the markup configuration of your search page, which is accessible through the Code View tab in the Interface Editor (see Automatic Initialization and Using Attributes).

You can now normalize facet values captions directly in the Interface Editor.

You can now use the basic mode in the filter expression editor to quickly and easily generate query filters event without any knowledge of the Coveo query syntax.

It’s no longer possible to use the query filter expression editor to modify folding expand expressions.

The new filter expression editor helps you create or modify query filters by:

You can access the filter expression editor to create or modify: